Have I mentioned lately how strange certain sketches can be? They aren’t strange in a “that made me think” kind of way. They’re weird in a “guy in a really bad leather jacket hugs a guy barbecuing kind of way.” Also, the word Super Garnish is used. Go put “Super Garnish” into Pinterest and examine the results, I’ll wait.

Yep. I’m sorry to suggest you do that. They didn’t have Pinterest back when this was filmed, but there were still minds to think up that monstrosity. Weird minds made the internet, the internet did not create weird minds.

This episode is a brilliant mix of strange, weird and wonderful just like the internet is. In this episode Kevin has the best parts, Bruce really lets his inner weirdness shine and Mark looks really good in pink hair. It really suits him.

Premise Beach parts 1 & 2 are cute little pieces that feature the most 80s beachwear I’ve ever seen, the house band Shadowy Men on a Shadowy Planet and two guys who can’t dance. If you’re thinking to yourself, maybe it’s just this sketch… no. The Kids (with the exception of maybe Scott) cannot dance.

But I digress. Premise Beach involves neat little ideas that are explained quickly and pack a comedy punch. I’m not a fan of the gift head one but I like the “meat hand politician,” if only because of the expressions on Mark’s face when Scott, dressed as Danny Husk no less, offers to shake his hand. How would that guy get gloves or mittens to fit? With a full-length sketch you would then take these premises and maybe expand on them more and more. I hope to never see either of them as full sketches, they just aren’t meaty enough. 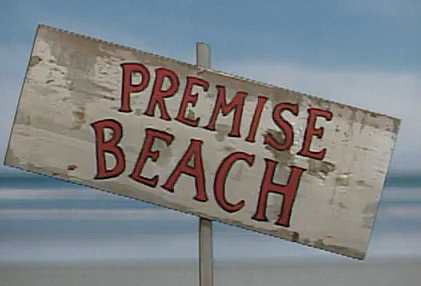 The second Premise Beach leads into Shitty Soup and well, this sketch is among my least favourite. I see the appeal, I understand the humour but I just do not find it funny. It works as an excellent piece to set up Scott’s monologue though about Gay Entertainers and it blurs the line between it and Premise Beach. I think by this point all of the Kids were beginning to explore transitions between sketches and began to play around with the format of the show, (something that would be exploited in later seasons).

Stinky Pink involves the only recurring character this episode. Fran (Scott) is back, without Gordon, this time to help her friend Barbara who is dealing with a separation explain to her son Seanie (Kevin) why his dad won’t be living there anymore. I love the Fran character. She’s a strong, assertive older woman, a great example of what their goal was when it came to female characters. Kevin plays a great kid, it’s almost eerie how young he looks and sounds when he pitches his voice up and is wearing kids clothes. The actual thought behind the sketch is very basic and this is where the troupe shines. They take a basic idea and they don’t even throw it that far into left field. They take it and through dialogue and actions make it very funny. The pink hair, and THAT being the element that makes Seanie go over the edge is great. His dad not being around, that’s manageable… but his mother having pink hair?! The world has turned upside down! What will his friends think? It’s a great sketch with a great example of guys in drag vs guys playing great female characters.

Crouton is Bruce telling a story to kids about a giant crouton he had.

That’s the sketch, that’s the kind of genius the Kids in the Hall could perform. Watch it, be mildly disturbed by it, wonder what those kids think and then watch it again.

Olympics reminds me of a similar Olympics sketch that Monty Python’s Flying Circus did during their seasons on the airwaves. It has the same qualities as Silly Olympics but blended with the wonderful dry, weird humour of Philosophy Football. Mark’s commentary has a kind of Cleese feel to it, but it’s a bit lighter than Cleese’s intense delivery. It’s also interesting that they finally have Kevin playing an athletic role. It’s been said that Kevin in the most athletic of the group and yet he’s always referred to as the slow one, there’s references to his asthma, etc. It could be he was just the skinniest. The sketch also brings in another person who isn’t one of the Kids, feel free to tell me who plays the winner of the Shotput but you don’t often see someone with a feature spot who isn’t one of the give guys or Nicole de Boer (Laura).

The last piece looks filmed, it has an ethereal quality about it but it might have been just the way it was shot. It tells the tale of a man and his fly. It’s also a story about a man and a woman, but really the fly is the star. It’s got the usual Mark wit, mildly self-deprecating and slightly twisted.

The best kind of love letter.

This review is a kind of love letter to this season as we only have two episodes left. After that we’re onto the weirder, wilder, Chicken Lady-er, Pit of Penultimate Darkness that is season 2. Please keep leaving your comments and opinions!

Watch on youtube? Please purchase the box set when you are able. (amazon.com/amazon.ca/amazon.co.uk [NTSC])